What is the truth behind claims east London Muslims are being targeted by acid attackers?

After the attack on Resham Khan and her cousin Jameel Muhktar, some Muslim residents of east London have been afraid to leave their homes

A spate of acid attacks has left some Muslim residents of east London afraid to leave their homes.

Fears have been heightened after 21-year-old aspiring model Resham Khan and her cousin Jameel Muhktar, 37, suffered horrific injuries when an attacker squirted acid through their car window in Newham, east London, on 21 June.

Police initially said they had no evidence the attack was racially or religiously motivated.

They reclassified it as a hate crime, however, after Mr Muhktar insisted Islamophobia was involved, and after posts expressing sympathy for the far-right were allegedly found on the Facebook page of John Tomlin, 24, who is being sought for questioning in relation to the incident.

As news of the attack spread, social media users began to report other acid attacks, with some speculating that Muslims or people of Asian appearance were being targeted.

When Muslims are victims of an attack, we refuse to call it terrorism

The incidents included a man of Asian origin having a noxious substance squirted at him while driving in Commercial Road, Tower Hamlets, on Thursday, with the attackers stealing his car as soon as he got out to seek help.

There were also social media reports of two attacks in East Ham on Friday  one involving a woman being partially burned on her doorstep by someone pretending to be a delivery man, and the other of a woman being targeted by moped-driving acid attackers in the Plashet Grove area. 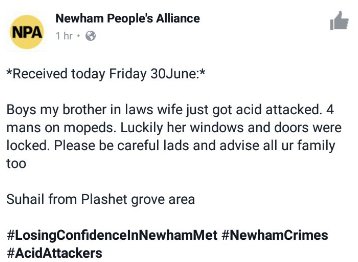 Uploaded a couple of hours ago – another acid attack in Newham. Please keep safe.

Fears about what was happening led to east London residents calling an emergency meeting on Sunday evening that was attended by Tower Hamlets mayor John Biggs.

He listened as the resident chairing the meeting said: These attacks are happening on our doorsteps. Our women, our men, our youngsters are feeling unsafe. They are scared to come out of their homes.

The fears were echoed by a local imam, who stressed that some acid attacks were robberies, not hate crimes, but admitted: Even my own wife was saying to me yesterday that she didnt want to leave the house because she might face an acid attack.

On social media, meanwhile, the warnings have included: Please be careful, especially if youre brown. These attacks seem to be targeting south Asians or Muslim looking people.

One of my boys friends just got acid thrown in his car between Wanstead and Forest Gate. Please be careful especially if you’re brown

At this stage, however, the only acid attack being officially treated as a hate crime by police is the one on Ms Khan and Mr Muhktar.

Many of the other incidents seem to bear the hallmarks of particularly vicious robberies, rather than hate crimes.

In one incident, in Limehouse, east London, the victim was white, and the social media user who tweeted a video of him being hosed down with water by paramedics confirmed it had been a mugging.

.@ReponTweets @ibnsabeel
any idea of motive
why was this man targeted?
random?
mugging?
or just antisocial behaviour?

It was not immediately clear whether all the incidents detailed on social media have been reported to police, but Scotland Yard told The Independent that the attack on the man who had his car stolen on Commercial Road was being treated as a robbery.

A spokesman added that it was not being linked to the attack on Ms Khan and Mr Muhktar, which took place in the neighbouring borough of Newham.

In another attack cited on social media, outside Whipps Cross Hospital in Leytonstone on 8 June, the victim, junior doctor Syed Nadeem, 44, said four masked men on mopeds had rushed towards him shouting: Give me your money or Ill cut your throat. Mr Nadeem was sprayed in the face with acid and suffered burns to his face and arms.

The methods outlined in the warning and in the robbery of Mr Nadeem seem similar to those used in the attack on the woman driver near Plashet Grove in East Ham.Mr Nadeem did reveal that NHS staff had been sent a warning on WhatsApp after A&E doctors treated three other victims for acid burns in the space of an hour. He said: We got a text message saying people had been knocking on car windows and when you open it, they throw acid in.

This was described as an attack by four men on mopeds. The intended victim escaped unharmed because her car doors were locked and her windows were up.

The incidents in Newham and Tower Hamlets also come after the two boroughs were said to be among the areas of London where acid attacks are most common.

In March, a Freedom of Information request to the Metropolitan Police suggested Newham was the London borough with the most recorded acid attacks, with 398 incidents between 2011 and 2016.

Tower Hamlets had the third highest number of acid attacks, with 84 incidents recorded between 2011 and 2016.

Worldwide, about 80 per cent of acid attacks are by men on women, often in revenge for spurned sexual advances or marriage proposals.The figures also showed a sharp rise in acid attacks across London as a whole, with 431 incidents in the capital in 2016, compared to 261 in 2015.

But in the UK, acid attack charities believe that a high percentage of attacks are male-on-male, with gang members increasingly using acid as an easily-obtained weapon.

The attack on Ms Khan and Mr Muhktar has led to a more than 255,000 people signing a petition calling for tighter restrictions on the sale of corrosive acid.

Stand Up To Racism is also organising a vigil in solidarity with the two cousins, to be held at Stratford Station in east London on Wednesday evening.

This entry was posted in Disclosure, Ideaology, Not Terrorism, Redneckia. Bookmark the permalink.